Within this universe, Posca Noir is a constant. It is present on all the supports that the artist explores, paper, wood sheets, glass resin, textile, vinyls, sneakers, musical instruments … Without a particular message, he paints whatever he likes.

Rémi Larson, also known as BINOKL, is a Norman artist born in Le Havre in 1982. He currently lives in Rouen. The first manifestation of his desire to paint dates back to his childhood, when he reproduced « Monsieur Madame » by Roger Hargreaves. When he was a teenager, his elder brother introduced him to graffiti, which Rémi Larson later practiced for years, having MAC Crew,
Mode2, Basquiat, Steph and Mist as teachers. Most of the characters created by the artist wear glasses, he chose to call himself BINOKL.

Influenced by comics and street art, but also by Picasso, Kandinsky and Dali, BINOKL has developed a unique universe, which he calls Bionic Ethnic. His favorite subjects are music, nature, and everything that crosses his mind.

BINOKL also does live performances, a practices he particularly likes for its approach to the audience, the atmosphere and the music: « People look at me, and I know that I can mess all up at any moment! that puts a bit of pressure on me but I recognize, I like it. 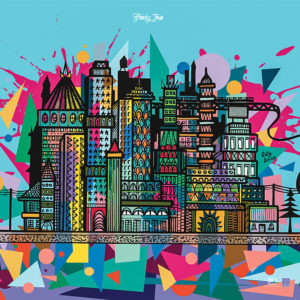 The style of the artist Binokl is Foncky Fresh. Fervent adept of black marker and flash colors, his universe is hypnotic.

With this artist’s square with repeated forms between complexity and minimalism he gives life to a « Foncky Town » with shimmering colors. 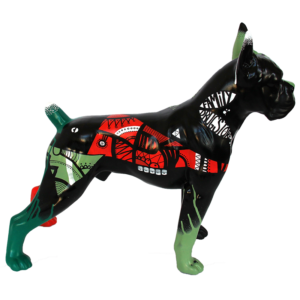