Since the early 90s’ Jo has been working on walls and trains with Nestor & Lek, with their VF team. A fervent fan of graffiti, Jo gradually moved away from it and created what he would later call the « POP GRAFFITI », mixing collages, various influences of Graffiti, but also the Pop culture with which he had become deeply immersed…

New emblematic face of the Parisian street art scene, Jo Di Bona owes his dazzling success to the unique technique he invented himself: pop graffiti. His work associates collages, diverse graffiti influences and the pop culture he is deeply immersed in. Fauvist of the modern times, Jo mixes colors and movements to create faces filled with poetry, emotions and joie de vivre. In his creations, Jo pays tribute with the same tenderness to icons and great historical figures as to unknown strangers. He projects a kind look onto the human being as “sharing is what matters to me most” (Artist’up)

Rewarded in 2014 with the prestigious “1st Prize of Graffiti” from the EDF Foundation, Jo has since produced many international exhibits, performances and murals. To be noted in particular are his murals on display at the Museum of Immigration in Paris,
his huge murals in Paris, at the Loures Arte Publica in Lisbon or for the French Consulate in the heart of Atlanta, side by side with Virginie Barrou Planquart and Joël Knafo in international fairs in NYC, Miami, London, Hong-Kong, Lausanne or Munich…and his monumental artworks during the Street Art for Mankind exhibitions of New-York and Miami.

Praised by the media, Jo has, among other things, been presented at the French News on channel France 2, M6 or in the Télématin program, made the cover of the magazines “Arts Magazine”, “Street Art Magazine”, “Paris Tonkar”, was listed by the website APSTER among “the top 10 artists to follow in 2016” or in the top 5 of Konbini’s favorite Street Artists in 2018, and made the front page of the prestigious New York Times for his mural created in tribute to the “Petit Cambodge”. Jo was also one of the first Street Artists to exhibit his work at the United Nations in NYC in January 2017. (Audrey Decker) 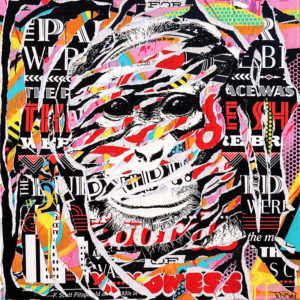 The universe of the artist Jo Di Bona is clearly defined as « Pop Graffiti ».

On the square  » Cities Of Monkeys  » the artist refers us to the influences of pop culture. Bringing out the look of this monkey locked behind bars of collages.

The universe of the artist Jo Di Bona is clearly defined as « Pop Graffiti ».

On the artist’s square « La Dolce Vita » the influences of Italian culture and pop art are mixed. A true homage to the icon Sophia Lauren, he brings a colourful look at feelings of love.

This cotton and silk voile square with a Pop Art pattern will bring an original touch to any silhouette.

This giant vintage letter « S » of 1m20 is customized by the artist. Jo Di Bona.
It will bring a vintage and pop graffiti spirit to your interior, either on the floor or on the wall.